Networking with the Pros – WIFVNE Career Symposium at Lesley University Meet other WIFVNE members, non-members, students and professionals in the field. Learn important elements of transitioning from student to professional roles in Media Production with professional insights, career wisdom, and networking. Light refreshments will be served.

What do you need to know to get that first job on a film set? WIFVNE President Alecia Orsini will walk you through some of the lingo, gear, and best practices for becoming a Production Assistant.

Do you know how to properly wrap a cable? Fly in a pancake? Or lock up a set? When should you expect to be paid and how much? What are some of the key things you should know to protect yourself? Learn about these topics and more. A few lucky participants will get to prove they have what it takes!

Learn about the panelists:

Starting her career in Richmond, VA, Nicole Hollis-Vitale has worked at various agencies as both a broadcast and digital producer, creating numerous TV commercials, videos, and integrated campaigns. She currently works as a Senior Producer at Arnold Worldwide in Boston, working with clients like Progressive Insurance and Santander Bank. Recently, Nicole produced her first short film – “Lucy” alongside a local director and it’s currently being submitted to the festival circuit. 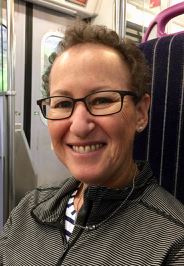 Julie Kahn is currently working as a Post Production editor for Masterpiece at WGBH in Boston. Before getting her dream job at Masterpiece in 2014, Julie was a freelance editor for 30 years working on national television programs for PBS, ABC, the Discovery Channel, Science Channel, ESPN, Lifetime, Animal Planet and more.  Her portfolio includes several series, hour-long, and half-hour programs as well as documentaries and independent films.  Nominated twice for an Emmy award for her editing work on the PBS series Zoom, Julie has also been a member of two teams that have earned New England Emmy Awards and a Peabody award. Julie is married and lives in Watertown and Brewster, Massachusetts. When she’s not in a dark editing suite she can be found traveling the world, walking Henley, her lab/aussie mix, or working hard on her golf and tennis games.

With more than 15 years of experience working with amazing and talented creatives on broadcast campaigns, web content, and TV shows, Kristen Kearns, COO / Executive Producer at Element, thrives on making certain that every project is executed with the highest creativity and in the most efficient means possible. Kristen oversees everything from business affairs to client relations and also heads the post-production department. In addition to captaining the ship here, she’s been an agency producer and casting director. She’s worked with brands such as McDonald’s, SimpliSafe, Liberty Mutual, BMW and the Department of Defense.

Heather MacDonald is a writer, director and producer with a background in theater, television, and digital media. Heather co-wrote the Emmy Award-winning and Sundance Audience Award-winning documentary Jim: The James Foley Story (HBO). Her work on the film earned Heather a Humanitas Prize for Documentary Writing. In 2019, Heather wrote and produced Augmented, a STAT News feature-length documentary about MIT professor Hugh Herr, a double-amputee developing the first brain-controlled robotic prosthetic. She is currently in production on a documentary about the legalization of cannabis in Massachusetts. Heather holds a BFA from NYU’s Tisch School of the Arts, and an MFA from Columbia’s School of the Arts. She lives in Cambridge, Massachusetts.

This event is being produced in coordination with Lesley University’s Office of Community Engagement and Rule Boston Camera (hey, that’s us!).